you say you want a revolution… 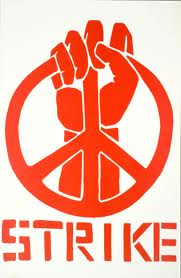 What if the revolution really is happening?

I’ve read the doom and gloom predictions that the U.S. is due to fall, if for no other reason than the fact that no empire has lasted more than about 200 years.

I ask “and so?” It might well be an accurate prediction. I’m not so sure it’s a dire one.

I hear cries of those who worry that U.S. exceptionalism is being undermined by Obama’s generation (which is my own) and those who follow. I ask “why exactly do we need to be number one?”

My partner has a fierce aversion to competition. I grew up in a meritocratic home, school system, work environment. It wasn’t until I started studying the history of education in this country that I ever considered the downside of a meritocracy. I appreciate my partner’s insight into the dark side of competition. It’s one thing for an individual to strive to be, or perform, or live in ways that stretch him/her to “their best.” (What does one’s “best” mean, you ask? That’s for another day and another blog post.) It’s a different dynamic when a person competes against another person. Someone loses. And it’s another thing entirely when a group of people compete against another group of people. Scapegoats emerge. At a national level, the posturing and protectionism, the ethnocentrism, all teeter dangerously on the edge of the sandbox. Are the moves of our armies and generals and government officials and economic/market forces really all that different from the games being played out on the grade school playground?

Questioning the value of the U.S. being number one is not something to float safely in mixed company (so to speak). For many, and perhaps especially so since Sept 2001, patriotism is synonymous with good character. Even hinting at criticism of U.S. exceptionalism is akin to heresy, and it raises blood pressure and voices in response.

But I wonder what’s so wrong with being #2. Actually, I wonder what the world could possibly be like without bordered national identity and a hierarchy of comparative ranks at all.

Is it possible that the revolution is really happening? Could the hierarchy collapse?

This entry was posted in Uncategorized and tagged anarchy, competition, occupy, revolution. Bookmark the permalink.